Outlook for 4G and 5G with COVID-19 and climate change 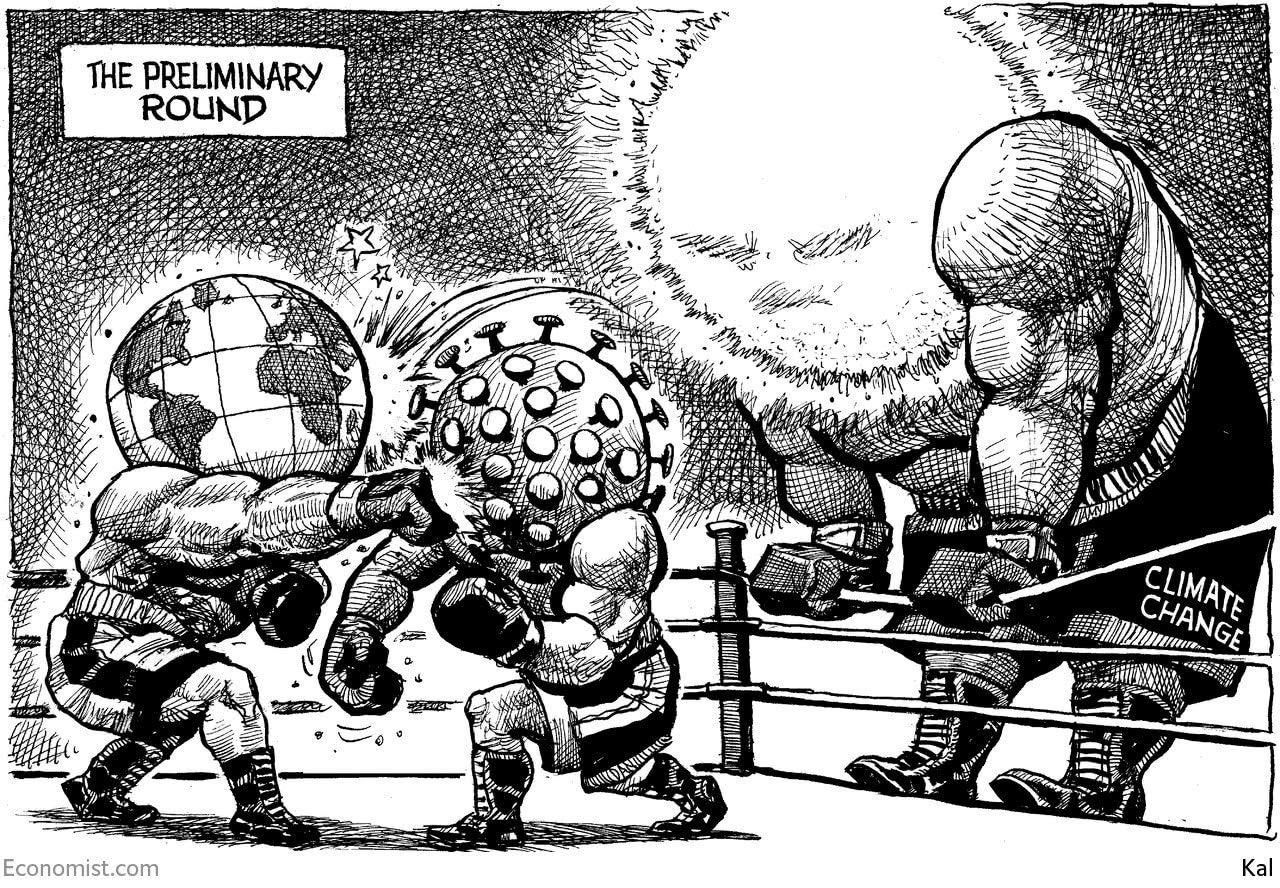 The long-term growth trajectories, to 2025 and beyond, for all telecommunications, including mobile and 5G, are significantly elevated by the effects of the COVID-19 pandemic and the looming climate change crisis, that will also make us stop traveling around so much in motorized transport.

Since the onset of the pandemic in Q1 2020, growth forecasts for 5G have been sustained by Qualcomm and increased at Ericsson.  But forecasts for new technologies are always imprecise, are commonly conservative, and are periodically updated as actual figures are far more accurately tracked. Accordingly, it is unclear from these statements alone whether effects of the pandemic will boost demand for mobile communications in general or for 5G in particular.

While the coronavirus crisis is causing some short-term reductions in supply and demand for mobile devices, preliminary indications are that mobile device usage has increased, while fixed networks and WiFi connections to them, where available, have accommodated most of the traffic growth, including smartphone data offload while people have stayed home. Mobile broadband data traffic—typically over 4G—has grown substantially where large proportions of populations have no fixed Internet access, but nothing like so much, if at all, elsewhere in developed nations where they do.  So long as economic output is not too severely suppressed, overall effects of COVID-19, on increasing demand for communications, will persist after the virus crisis is over.

Following the first case of COVID-19 in December 2019, actions taken to stem the infection rate by governments around the world have been necessarily severe, including lockdowns with mandatory stay-at-home orders in many nations. The pandemic infected 863,000 and killed 39,000 worldwide by the end of March 2020. Those figures increased exponentially to 3.3 million and 234,000, respectively, by the end of April 2020.

Use of electronic commerce and communications have surged enormously in place of many offline activities we have taken for granted. While some usage has migrated from smartphone apps to online with PCs, and despite smartphone WiFi offload also to fixed-network access at home in developed nations, mobile voice, everywhere, and mobile broadband data usage has significantly increased in developing nations where fixed access is far from universal or lowly penetrated. For example, South African operator Vodacom claims fixed and mobile network traffic have increased 250% and 40%, respectively, during the COVID-19 lockdown. Huawei claims a 30% increase in mobile Internet traffic in China.

According to Ericsson in its recent UnBoxed Office presentations, mobile networks have generally held up well to increasing traffic demands and changing usage patterns of late. Ericsson also observes that developing nations are experiencing higher mobile data growth rates than in developed nations where fixed network access is much more widely available.

While supply and demand for some ecosystem elements, such as smartphone devices, have temporarily reduced, with economic recovery restored in the medium and longer term over several years, demand trendlines for devices as well as networks and services will rise to much higher levels than hitherto.

This needs to be so: increased virtual activity on fixed and mobile networks in place of physical movement and presence will also help avert or at least mitigate the looming crisis in climate change. As astutely depicted by The Economist in a recent cartoon, climate change will not be so quickly or easily conquered. Previous climate changes have caused mass extinctions – look what happened to the dinosaurs! What we are going through now with COVID-91, tough though it is for many, will also serve as a laboratory test on how we can reduce our carbon emissions with dramatically reduced motorized travel while people increasingly remain in the locality of their homes.

Like many in the mobile industry, the effects of the looming pandemic struck me early. Among one hundred thousand others in the mobile communications industry, I had planned to attend the Mobile World Congress in Barcelona at the end of February 2020. While scheduled to be there only Sunday to Wednesday of the trade show, I had declined participation in an analyst roundtable meeting with Nokia’s CTO. However, with cancellation of the entire show, that meeting was reorganized to be a video conference, in which I was able to participate. However, timing was still awkward for me to “attend” at my desk on my PC. Instead I was able participate in my car with excellent hands-free audio and video with my Galaxy S9+ smartphone sitting in its air-vent mounted cradle.

With the closure of many businesses under lockdown, all but “essential” workers have been forced to stay home with major restrictions on when they are allowed out and for what. Our daily patterns of (in)activity have changed markedly including massive substitution of electronic communications and commerce for face-to-face interactions in our work, socializing with each other, entertaining ourselves and in making purchases. Video conferencing on PCs, tablets and smartphones, for example, using Zoom for meetings, workouts, and social gatherings is now the norm. While I had already done some video calls socially and occasionally for work meetings, over many years, with colleagues scattered geographically, I had never done video in my car like that before. Since my lockdown in March, I have been doing a Zoom-based workout with my grownup children every couple of days and I have had far more WhatsApp video calls than ever before.

With most stores closed, e-commerce is the only option for the purchasing of many goods. The closure of sports and live entertainment venues is further increasing our consumption of video and audio on our home entertainment systems and personal devices.

Humans will always seek some in-person presence and interactions, and many are willing to pay dearly for this, as illustrated by the astronomical prices paid for seats at premier sports events and to see the most highly rated performances by musicians, dancers, and actors. With the squeeze on recorded music profits over the last couple of decades, due to piracy and the switch from records, tapes and CDs to downloads and streaming, there has been on an economic pressure on many artists to do more live performing.  Nevertheless, the trend towards remote electronic consumption is relentless. For example, watching live sports in the comfort of one’s own home on a large high definition TV screen with commentary and replays is an increasingly attractive alternative to over-priced seats “in the gods” and a two-hour commute home after the game.

COVID-19 is a major shock with permanent effects. There will inevitably be some reversion to old ways, as restrictions are lifted, but not to former trendlines. Just as the 2008 financial shock lowered economic growth trendlines by several percent, for example, in the UK, the trendlines for data consumption on fixed and mobile devices, including watching video and online purchasing will, instead, hike upwards with this new shock.  In other words, historic growth trends, or possibly steeper trends, are likely to persist on top of the discontinuous growth the COVID-19 shock has recently added.

Back in early 2011, I published a 15-year forecast of global mobile data demand to 2025 increasing 1,000-fold. This was very much a top-down exercise, which I revisited in 2018. Prior to making that forecast, I had learned from many years of experience in market forecasting that it is virtually impossible to predict with accuracy which particular emerging mobile applications will result in substantial demand growth and when, beyond a year or so. I recall my research team at industry analyst firm Yankee Group in the 2000s producing 3G forecasts for “location-based” among other services that were not realized over the typical 5-year forecasting periods. Nevertheless, commencing one decade later, with, for example, Uber’s ride-sharing application in 4G, growth of such services has been phenomenal.

Similarly, while virtual reality could be a massive contributor to mobile broadband growth for 5G, it is anyone’s guess how popular that application category will be and over what timeframe. In a US court deposition last November, while being congratulated that my aforementioned aggressive forecast was “pretty good” for the first half of its 15-year outlook, opposing counsel also critically asked me how the high compound annual growth rate would be sustained for the rest of my entire forecasted period to 2025. I replied that “You can’t [predict]with certainty precisely what will come up.” However, my forecast was confidently based on a considered belief that something(s) would crop up to achieve this continuing growth throughout the forecasted period! Serendipity?

While under full or partial lockdown at home, it is particularly with the fixed networks including WiFi connections that demand has surged for most people in developed nations, such as Sweden and France, where only around one in ten people are dependent on mobile networks at home. Elsewhere, mobile demand has increased by up to 20% in nations including India and Brazil, according to the Ericsson in its recent UnBoxed Office presentations. As lockdown restrictions are lifted, people will move around more, increasingly using 4G and 5G rather than WiFi connections, but the increased use of popular bandwidth-hungry applications such as Zoom and Netflix will persist. While 4G and increasingly 5G that can satisfy this increased demand immediately or rapidly, some prospective expansion or enhancement to fixed networks will be pre-empted.

Wobbles along the way

There have inevitably been some short-term supply and demand impairments in the mobile sector during the current crisis. For example, while PC sales are up and we have been using our smartphones even more than usual over the last month or two, global smartphone sales shipments have suffered their “largest year-over-year decline in Q1 2020 due to COVID-19”, according to IDC. It could be at least another couple of quarters before there is recovery. However, it is inevitable there will be catch up in due course, so long as overall economic effects of the pandemic are not severe in the long term. In fact, the economic efficiencies of online and smartphone-based activity, versus offline with the costs of travel to bricks and mortar facilities will continue to stimulate substitution of virtual for in-personal presence and interactions. The more our mobile devices are used—over WiFi or 4G/5G connections—the greater the demand for upgrades, pass-on of old devices to other family members and to replace devices that break. Significantly, demand for 5G devices has held up, despite the crisis.

A prelude and a shot across our bows

With the increasing pressure to reduce carbon emission from flying and driving, the increased use of fixed and mobile communications will inevitably endure.

Terrible though pandemic is, we will surely overcome this crisis with control over the virus probably within months, then a vaccine, and hopefully total eradication of the virus likely within a couple of years.

We have discovered we can work, socialize with each other, entertain ourselves and buy much of what we need without leaving home. And, under lockdown, some of us are getting fitter than we have ever been before by exercising at home, or from home by bike or on foot. Our carbon footprints are thus much reduced.

So, while eradicating the virus might make it possible to return to our old ways without fear of infection, it will be in our long-term interests to continue with a lot of what we have been doing lately, and that we find other ways to substitute what is virtual and online for much of what is physical and offline. We might even prefer it that way, including the travel time and money it saves us.