Near, far, where-edge-er you are–The right edge for the right application

Edge computing is a broad term that, at a high-level simply means moving computing out of data centers and closer to where applications are running, but has specific qualities that pin what specific edge being referenced to the requirements of an application.

To understand where the telco edge is, think first of an operator’s existing footprint, including pooled and standalone base stations, macro radio sites, colocation facilities, etc…In the context of a consumer 5G application like mobile gaming, putting compute at existing sites would pass on the latency benefits to the consumer by way of an improved mobile gaming experience with less jitter and lag and more responsive controls.

For an enterprise, the edge, in many cases, sits at their facility. A manufacturer using 5G to connect robots needs to ingest, analyze and take action on machine-generated data in as close to real time as possible. If an operator is, for lack of a better term, selling edge computing as a service, favorable conditions could lead to placement of infrastructure that meets the specific customer’s needs as well as furthers the operator’s larger goals. Conversely, an enterprise, working with partners, could invest in a private network and the edge computing needed to maximize the value of the network.

So far these various edges have existed on the transmit side of the radio link, as far out as a radio site. However, as devices become more and more powerful, there’s a case to be made for the device as the ultimate edge. Things like on-device artificial intelligence is backed up by the compute power necessary to use apps with voice-based interfaces and for virtual assistants to interface with our calendars and contacts. Then, as explained in the next section, is another edge also on the user side of the radio link but not handsets.

The point is, how you define edge is a function of the type of service being considered. The more latency dependent an application is, the closer computing should be to the user whether that’s a person or a machine.

Inseego on extending the edge

As laid out above, there’s a case to be made for the handset as the ultimate edge given ongoing enhancements to on-device AI based on various hyper-local data inputs. Dan Picker, CTO of Inseego sees another edge, a “bleeding edge,” that resides on the user side of the 5G radio link but not the handset–rather devices like the company’s 5G MiFi mobile hotspot which is compatible with the global New Radio standard and supports both sub-6 GHz and millimeter wave frequencies.

Picker made the case for using a dedicated piece of equipment to make highest and best use of both the 5G connection and the features of the handset. On the user side of the air link, “That’s where Inseego plays,” he said. “We make access devices; we make edge devices” These connect to phones, enterprise networks, gaming devices, AR/VR devices, HD cameras and other connected tech. “What we’re doing with our devices is we’re putting a piece of edge compute power on the other side of the 5G link which is going to offer a ton of advantages.”

Move to the other side of the 5G link. “That’s where Inseego plays. We make access devices; we make edge devices.” those connect to phones, enterprise networks, gaming devices, headsets, other AR/VR devices or HD cameras. 5G is great for these sorts of applications. “What we’re doing with our devices is we’re putting a piece of edge compute power on the other side of the 5G link which is going to offer a ton of advantages.”

Picker laid out scenarios highlighting the advantages and disadvantages of 5G and the location of the edge for much-hyped use case–artificial and virtual reality. For VR, consider a standalone headset where an application is running on a device and that application’s content resides on-device. “That’s the best possible case.”

Now add in 5G. Content is delivered from the cloud in what Picker called a “unidirectional” manner. Relying on the cloud for more functionality means devices can get simpler and less expensive. This one-way flow from the cloud, over a 5G link, to a device works for VR but what about AR? 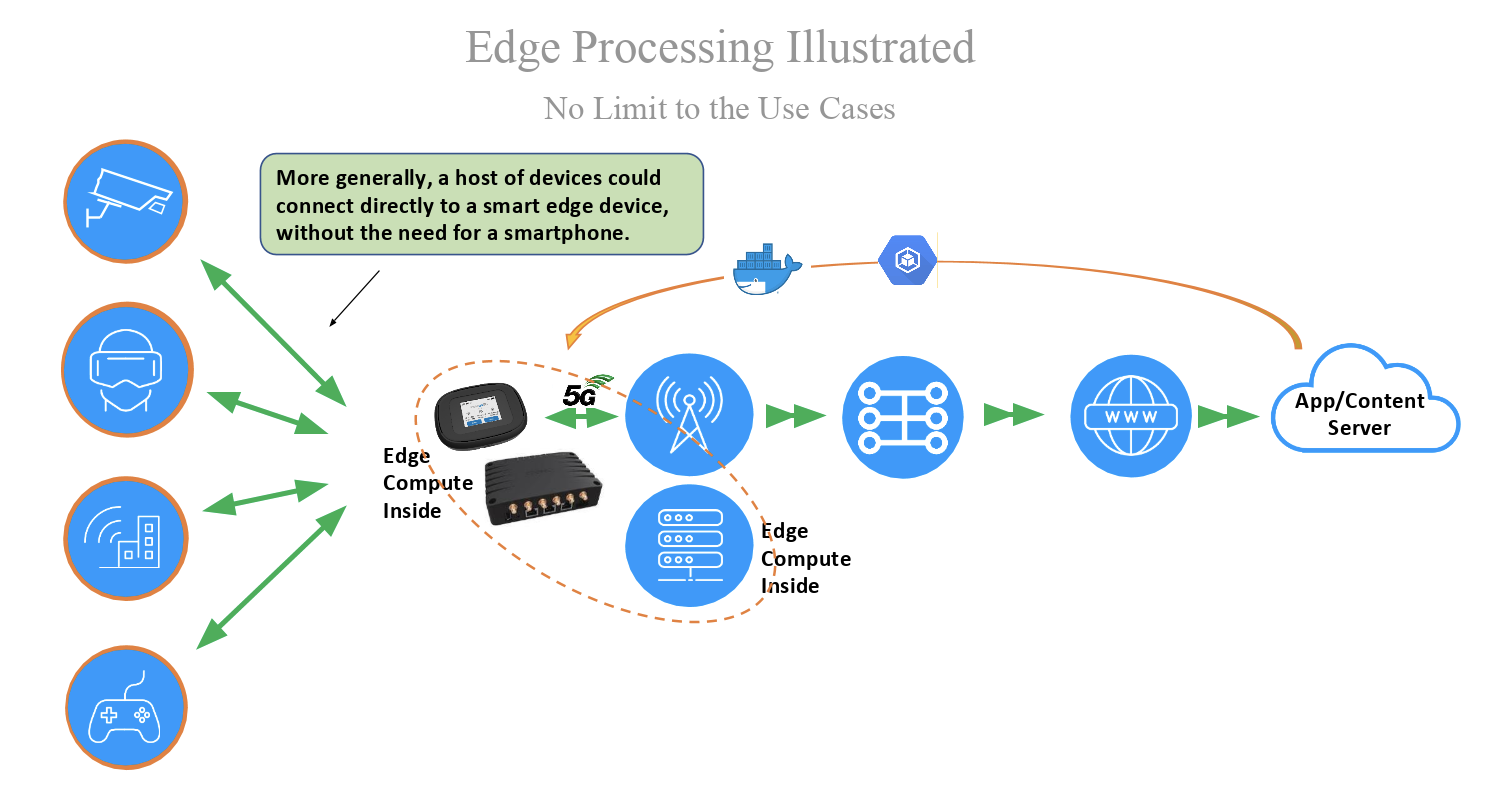 “You might have now some cameras,” Picker said. “Now you’re viewing the real world and you’re mixing into that the content that’s coming from the server. Now we’re dealing with a bi-directional stream. Latency suddenly makes a huge difference. This is where the edge cloud comes in. In this case, pretty much right up at the other side of the 5G link by the base station, processing and storage is brought into there. Now you avoid the bottleneck of having to go all the way through the internet to the cloud.” Given that we’re in relatively early days of building out edge infrastructure, this scenario is perfectly viable but very much a work in progress.

So, in order to sustain multi-gigabit 5G throughput while taking advantage of edge computing, a dedicated device is the answer, Picker said. “Now your handset can be used for what it’s meant to do. You put all the functionality into this edge device that not only provides the access to the cellular network but also handles a lot of that edge processing for you.” Beyond handsets, this paradigm applies to connected cameras, gaming systems, headsets and other types of consumer and enterprise devices.